In early July, Nyango and Naserian Mission held a special ceremony for young men making the transition to elders. This transitional ceremony has been held in Maasai communities for generation, but this is the first time that Christian blessings and prayers were incorporated into the ceremony. Over 500 men participated in the ceremony; together with their wives and elders of the community, over 1,200 people were in attendance.

The ceremony began before dawn with everyone gathering in the cattle corral for early morning prayers and singing. The prayers concluded with a blessing of the milk. Cattle and milk are integral parts of the Maasai lifestyle and livelihood, so blessing of milk acts as a blessing of health, sustenance, and community suc

cess. Next the men proceeded to receive blessings from community elders and greetings from the church clergy. The men processed, in a single-file line, from outside, into the cattle corral. As they crossed the threshold, the community elders anointed the right arm of each young man with a mixture of milk, oil, and honey. 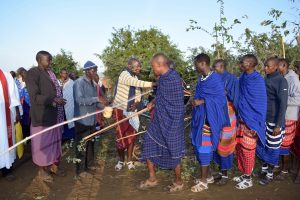 The elders washed this mixture from the arm to the walking stick and tree branch held by each young man. The young men then proceeded to shake hands and receive greetings from the clergy. After all the men had processed through, then their wives followed to be blessed by the elders and the clergy. The remaining parts of the ceremony included shaving of heads, symbolizing that the men are leaving their youth behind and are starting fresh as elders. And finally, all of the men participated in a meat-eating ceremony. Each man took a couple pieces of beef and drank a fermented honey drink, each a symbol that they are now elders of their community. 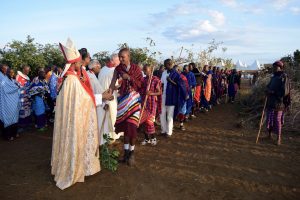 After the completion of the ceremony, the men, women, and elders returned to the open field outside of the cattle corral for singing, dancing, and celebrating. They joyfully celebrated the important transition in their community to welcome new elders. We are grateful for dedicated church leaders in Nyango and Naserian Mission for their commitment to incorporating Christian blessings into this important event, and for their invitation to KELC leaders and Maasai clergy from Kenya and Tanzania. Together we have witnessed a new way forward for our church communities to merge their Christian faith and their cultural heritage. Thanks be to God!